PHP 7 provides numerous performance benefits over PHP 5.x and in many cases can be over twice as fast. We recommend that all users migrate to PHP 7.

For large installations switching to PHP 7 will deliver an major speed boost in the UI. The image below gives an indication of the benefits.

An opcode cacher compiles PHP code to opcode, which means it won't have to be re-interpreted every time you load a page or run a script. It will automatically detect if the code has changed and re-compile.

Starting with PHP 5.5 the Zend Opcache is integrated and shipped with PHP. PHP7 also includes Zend Opcache cache by default. For web user interface (WebUI) the in-memory Opcache enabled by default, but for cli scripts we need to enable the file-based opcache. This can also be used as a second level-cache in general and should increase performance if the PHP process gets restarted or it runs out of memory.

We need to ensure that this directory is created at boot and correctly managed by the system, on systemd systems you can create a file /etc/tmpfiles.d/php-cli-opcache.conf :

Now create the temporary folder with:

After running an Observium script or waiting for a cron job to run you should see files created in that directory:

To check if Opcache is being used by the Web UI, go to the About page (in your WebUI) and see the "Version Information" panel on the "About Observium" page accessible from the right hand "Cog" menu. You should see "OPcache: ENABLED" together with PHP version.

To check if Opcache is being used by the CLI, run the poller or discovery script with -VV, ie:

Observium, since version 17.2.8348 includes an additional userspace cache mechanism, which can be used to speed up generation of pages on very large installations. This caching ONLY works with php version 5.5 and up, please see minimum requirements.

The Userspace caching is only recommended to assist scaling very large installations since it can delay data appearing in the web ui while data is in the cache.

By default it detects the best available way to cache user data on a server from: Zend Memory Cache, APCu, Sqlite, Files.

Currently you can use only single very fast in-memory caching driver by using the PECL-APCu extension. To use it, install and reload your apache server:

And enable the cache in config.php or in the WUI configuration editor

To manually select the cache driver, set in config.php by:

To see debug information about caching, add the string "cache_info" at end of any url.

One poller instance can only poll a finite quantity of devices in 5 minutes. Running multiple pollers in parallel will allow Observium do check more devices in the same amount of time. The install instructions set the poller to run two concurrent poller threads, which is only sufficient for small installs.

Do note that increasing pollers will only increase performance until your MySQL database becomes the bottleneck, or more likely, when all the RRD writes to disk start to slow down the disk I/O.

If you try to run too many poller processes on storage without enough I/O, you'll simply cause disk thrashing and make the web interface slow. Ideally the entire poller-wrapper process should take as close to 300 second as possible to ensure the lowest average load.

Performance data for the poller can be seen on the "Polling Information" page at /pollerlog/ on your Observium installation.

Putting the RRDs on a RAM disk

See the separate Persistent RAM disk RRD storage page to find out how to set up a RAM disk with sync to the disks so you don't lose your data when your machine crashes/reboots.

When all the I/O for the RRDs is clobbering your disk, your MySQL database will likely become slow too, due to disk congestion. This slows down the web interface as well. It is advised to put the database on a separate disk (separate physical storage medium, not another LV on the same disk/RAID) for this reason.

Note that running your MySQL server on another machine increases the latency per query. When a lot of queries are done this could somewhat influence Observium's performance (however, moving MySQL to another machine than the one with all the RRD I/O could still prove to be a valuable enhancement).

Observium fires off a lot of SNMP queries to your devices. It has to wait for each reply to come back (per poller), before the poller can continue. If your uplink is congested, or latency to your devices is high, less devices can be polled in the same time frame. You could up the number of parallel pollers (if congestion is not the issue) or upgrade your uplink so more can fit through the pipe to remedy this somewhat (until we run into "speed of light in a fiber" issues).

SNMP allows you to set the max-repetitions field in the GETBULK PDUs. This specifies the maximum number of iterations over the repeating variables in each operation, potentially vastly increasing GETBULK speed. Speed improvements are greater the higher the RTT between the Observium server and the polled device. The default used by the Net-SNMP commandline utilities is 10.

Compatibility with larger than default max-rep values depends upon the device's SNMP stack. Devices using a Net-SNMP-based stack or Cisco IOS will often support high max-rep values, but using even moderate values like 30 will result in problems with some platforms.

Using a max-rep value of 100 on a Linux host can return a three-fold reduction in the time taken to collect a ~1500 entry hrSWRunTable :

Observium includes predefined max-rep values for many OSes, but their use is disabled by default for compatibility reasons. To enable max-rep by default you can set the following setting in config.php.

This can also be configured on a per-device basis where it's not desired to enable it globally but individual devices will benefit from it. The setting can be found in the SNMP section of the device settings page. 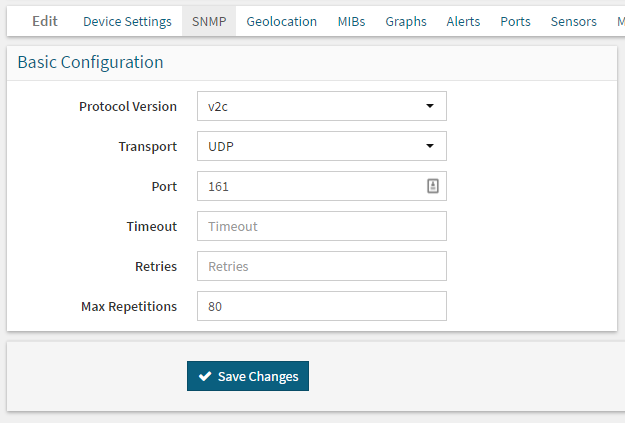